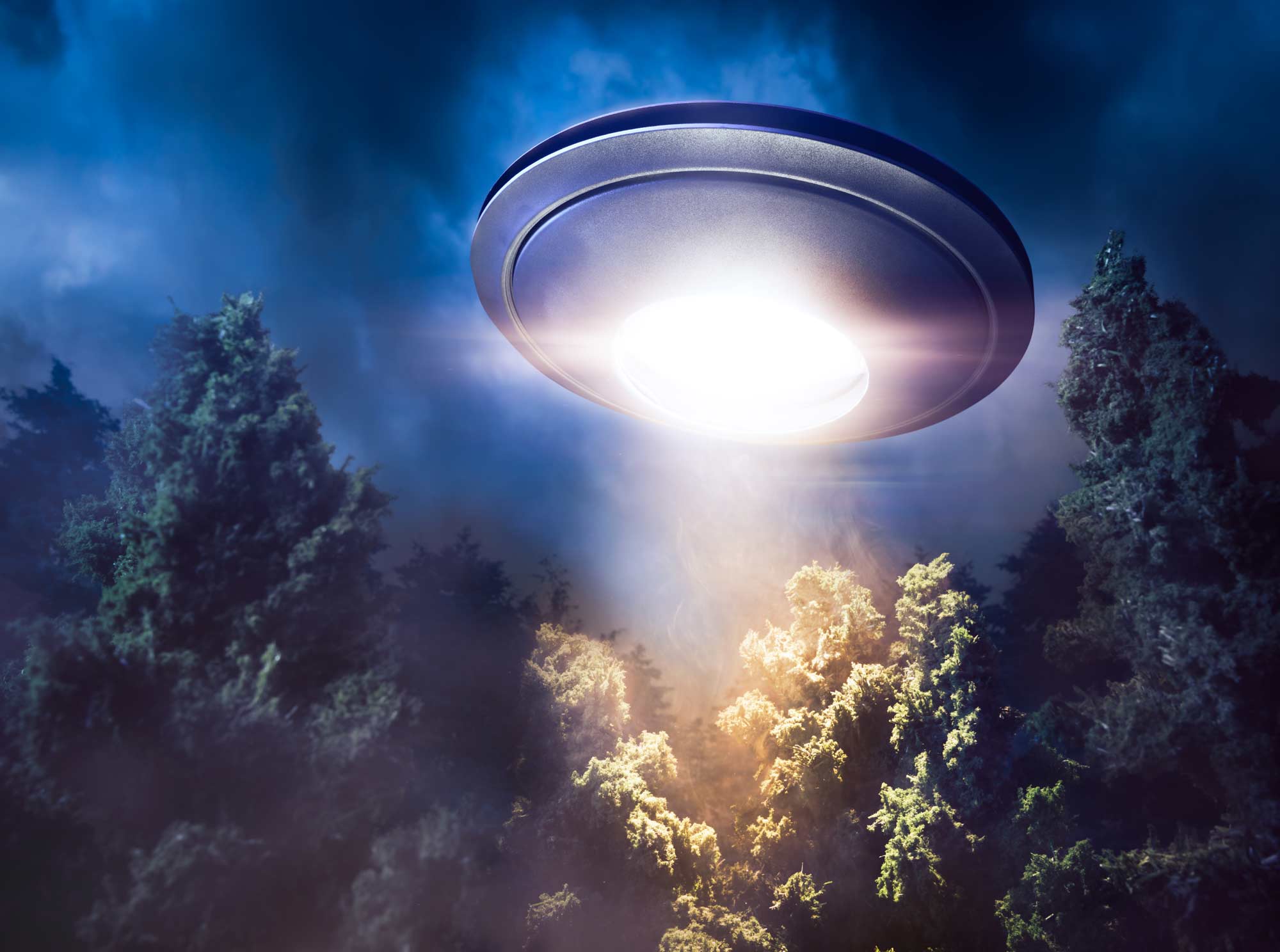 You might not realise this but Banburyshire is a bonafide ‘hotspot’ for strange and unexplained happenings – especially sightings of UFOs. Perhaps we can blame too much Hooky Ale. Maybe the sightings are just countryside mist. Or as crazy as it might sound, maybe there really is something strange going on all around Banbury and the wider area…?

UFOs (or a UAP – Unidentified Aerial Phenomena as the US Government now calls them) have been a regular occurrence for the Banburyshire sky-watching public for decades. Banbury, Bicester, Kings Sutton, Edgehill, Bloxham and many other places, have had at least one unexplained sighting or experience by bemused members of the public.

In 1974, two 13 year olds were left in state of fear and shock after being followed by a large hunched man, at the same time as witnessing a strange glowing light in the sky. The incident happened on the Ploughley Road just outside Bicester. Terry Hooper, one of the country’s foremost investigators into the unexplained and mysterious, has recently called for further information on the incident to help get a more in depth look at what happened that day.

Close by at the ex-USAF base Upper Heyford, there were even reports of a crash site in 1967, when a recovery team was appointed with taking away a small unmanned craft that had no cockpit, visible engine intakes or exhausts. The craft was taken to a hanger which was quickly sealed with robust metal bars. This area remains cordoned off to this day.

Of course many of these sightings are simply misidentification of planes, helicopters or airships, or even advanced projects conducted by the USAF… but perhaps not all of them.

Michael Soper, an Oxford based UFO expert and member of Contact International who has been investigating the phenomena since the 1970s, remarked in 2008 that; “Unidentified flying objects do exist and it’s possible we might be seeing an advanced life form, which can manifest itself in different ways.
“Crafts can come from other dimensions and they can appear, leave landing tracks and then vanish. It’s completely impossible for us to understand this, because they’re so incredibly advanced.”

Here’s a handful of the reports (investigated or not) from the past few decades;

Crouch Hill
An oblong shaped craft was spotted moving from Crouch Hill towards Bloxham in 1987.

Blue Lights & Strangeness
In November 2000, a couple of incidents occurred two nights apart; one south of Kings Sutton, one at Giant’s Caves near Broughton. The first witness saw a circle of bright white light, also with blue lights, just hovering in the sky. In Giant’s Caves a group of friends were playing when a strangeness descended. Movement occurred all around them, accompanied with strange blue lights. As they started to move away, one boy felt the presence of something partially invisible right next to him, so they all ran to the main road to get away.
Source: uk-ufo.co.uk, assets.publishing.service.gov.uk.

Kineton Fireball
A UFO was spotted by a south Warwickshire mum on Wednesday morning. It hovered over Kineton at 7.50am and a nearby aeroplane seemed to disappear as it approached the object. The woman witnessed a strange craft as she took her two sons to school. She said: “It looked really bizarre – like a huge flame with a whispy bit at the top and a black dot in the middle. I’ve never seen anything like it in my life.” Her two sons Jamie, 13, and Jacob, 12, were in the car with her and were equally baffled by the sighting. She continues, “They said ‘wow, it’s an alien’, and we sat and watched for two minutes, trying to figure out what it was. There could be a perfectly logical explanation, but I don’t have a wild imagination. I just don’t know what it was.” She drove her car down the lane to try to get a better look, but she lost sight of the UFO on the way.
Source: Warwick Courier.

Cyclindrical Object 2018
In July 2018, at least six witnesses near Banbury, witnessed a large black cylindrical object hovering high in the sky for around 10-15 minutes. It appears to slowly rotate on it’s central axis, apparently with disregard to the wind direction. The strangest part is the occasional and localised light strip, moving up and down one side of the dark object – not in relation to the bright summer sun. There’s also a small white object circling around the upper part of the object at specific intervals, although this could be pixel artefacts from the camera due to it’s zoomed resolution. The witness – a licensed and experienced pilot – who recorded the object and it’s strange show, captured it for around 5 minutes but when he went to get his tripod for better stability, the UFO accelerated off, upwards into the sky above. He had missed capturing an important moment, but the footage is still interesting nonetheless. It also appeared that airspace traffic was not present in the area when the object was in the air, but resumed as soon as it left. The incident happened in a village a few miles south east of Banbury.

You can watch a slowed down video below.
Sources: beamsinvestigations.org, YouTube, Oxford Mail.

A pre-recorded live studio debate was held in Banbury, to discuss historic and recent unusual sightings over the town. This was in a dance of a documentary being made by the BBC, for it’s current affairs programme Man Alive, which held interviews with residents about their views and experiences.

In the debate, Davis said the UFO phenomenon was a result of “the need felt by many people for a new mythology and hence their willingness to believe that natural things or events may have mysterious or extra-terrestrial origins”.

During the program itself, one witness to a dumbbell shaped UFO near Banbury, also describe how another man had encountered an actual alien lifeform. The man had been driving his lorry under the Bodicote flyover, when he noticed a strange humanoid on the side of the road, lit up by his headlights. As he got out of his cab to investigate, this 8 foot tall alien moved towards him. He promptly ran back to his lorry and sounded the horn which made the creature run away, jumping a hedge as it did so.

In 2017, scientists from the University of Oxford published a new study in the International Journal of Astrobiology, claiming that aliens may not be too far removed from us mere humans. In the paper Darwin’s Aliens, Samuel R. Levin and his team research how aliens are potentially shaped by the same processes and mechanisms that shaped humans, such as natural selection. The theory supports the argument that foreign life forms undergo natural selection, and are like us, evolving to be fitter and stronger over time.

You can read about the finds here, or read the paper itself here.
Sources: University of Oxford, Cambridge University Press.