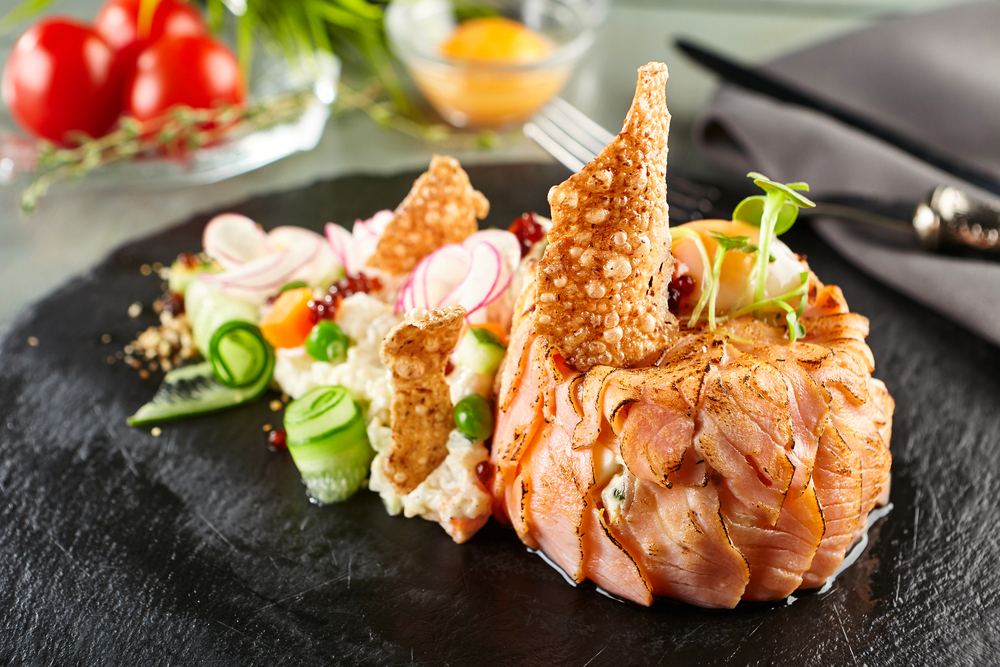 Home Things To Do Food & Drink

Whether you are looking to spend a lunchtime with a modern take on a hearty pie and a pint, or an evening of fine-dining with family in traditional surroundings, there’s plenty of local offerings for you and your fork to get stuck into (including a restaurant in someone’s dining room!)

British food has turned it’s reputation around in the past twenty years, with top chefs and restaurateurs quietly bringing our unique flavours and culinary ideas to the world.

Many independent restaurants and pubs have focused on seasonal, local and organic produce and the hiring of well-trained chefs, to serve mouth-watering, Michelin Star quality dishes in traditional settings.

Some of the best places are often family run businesses that pride themselves on ethical and natural practices, bringing the community together in a shared space. British meals are often hearty and based on supplies from local farms, bakeries, allotments, breweries and distilleries.

Some examples of dishes that you’d find in a British restaurant or gastropub;

Whether you’re visiting from overseas or are local to the area already, you owe it to yourself to spend some quality time sampling the best of what Banburyshire can offer.

When Indians and Bangladeshis arrived in Britain after World War II, they brought with them the essence of their culture in their tasty and versatile food.

Families set up restaurants and takeaway services whilst also developing a new twist on their traditional dishes. More suited to British tastes, these meals could be prepared with ease and on a budget so that many different dishes could be cooked and served at once.

As a nation we embraced the flavours and spices and as the decades progressed, these meals have become almost a ‘national dish’ in themselves. Based on a combination of turmeric, chilli, cumin, coriander, garlic, with onions and tomatoes usually added, these can also have health-boosting qualities when made using fresh ingredients.

Some examples of dishes that you’d find in an Indian restaurant;

Banbury and Bicester has the greatest share of restaurants, although there are a few dotted around in the outlying villages. A lot of Indian restaurants have a takeaway service if you prefer to eat in.

You cannot beat an authentic, freshly made, hand-stretched pizza. Or how about a fresh salad drizzled in olive oil on a summers day?

The choice of Italian restaurants has increased in the past ten years, adding to the variety of national eateries on offer in the area. In Banbury town itself there are a handful restaurants, all offering great value and of course that famous Italian hospitality.

Remember there’s so much more to Italian food than pizza and pasta, with a huge variation of fish, meat and vegetable dishes waiting to be explored.

Some examples of dishes that you’d find in an Italian restaurant;

There are a handful of Thai restaurants in the area, bringing the fragrant aromas of South East Asia to Banburyshire.

The key ingredients in most dishes are either lemongrass, chilli, ginger, peanuts, tamarind, coconut, lime and fish sauce, which all add up to a vibrant taste sensation that has to be experienced to be believed.

The decor of many Thai restaurants feature ornate wood carvings of traditional Thai scenes, with lush plants and a background of traditional music, all helping to transport you to another land.

Some examples of dishes that you’d find in a Thai restaurant;

Chinese restaurants are already very well known in the West, so it will be no surprise to learn that are many options available for your visit to the area, particularly in Banbury and Bicester.

Of course there are more takeaway kitchens than sit-in restaurants, but if you dig a little deeper you’ll find some real gems, offering great service and more comprehensive menu – sometimes offering Thai dishes along with Chinese specials.

Some examples of dishes that you’d find in a Chinese restaurant;

Turkish cuisine is much, much more than just kebabs. With influences from the Mediterranean, North Africa and the Middle East, the flavours and ingredients of Turkish cooking means there’s something for everyone. From hot or cold ‘meze’ (small mixed dishes similar to the Spanish ‘tapas’), to flame grilled ‘karisik izgara’ (mixed grill of lamb, chicken and kofte), finished off with gorgeous sticky sweets with fruit and nuts. Well worth looking out for.

Some examples of dishes that you’d find in a Turkish restaurant;

Fancy a little spice in your meal? Deeply flavoursome and often spicy, Mexican food is comfort food at its best, with fish, meat, corn, tomato, cheese and fresh vegetables all adding up to tastes beyond the sum of their parts.

Discover the best of Greek food; the fresh, vibrant and often very healthy dishes that have the power to transport you to a beach on the Mediterranean Sea. Perhaps there’ll even be some traditional dancing and plate smashing after your meal!

Very similar to Indian dishes but often healthier, traditional Nepalese cuisines are influenced by the country’s location and the rich and diverse cultures that live in and around the South Asian republic. If you like Thai or Indian then you’ll be pleasantly surprised.

There are a few Japanese restaurants dotted around Banburyshire, so it’s worth your while to seek one out for their healthy and fresh dishes. Ramen noodles, sushi, stir-fry, dumplings, succulent fish and soy sauce-soaked crispy vegetables… what’s not to like?

Spanish cuisine has really taken hold in Britain recently, with many bars offering Tapas and Spanish beers becoming very popular. Bringing a true depth of flavour, Spanish food is rich in history and variation due to the Mediterranean nation’s fishing and farming tradition.

Of course not all venues offer just one nationality’s cuisine, so be sure to look up restaurants that offer a bit of variety including French cuisine. You can’t go wrong with the classics, so many restaurants include these dishes anyway.